This program engaged over 11,000 individuals who provided ideas on how they wanted Downtown Vancouver to evolve over the next 25 years. Key themes that emerged from the report directly informed Downtown Van’s four-year strategic plan and featured a great emphasis on public space, and in particular, under-utilized alleyways. 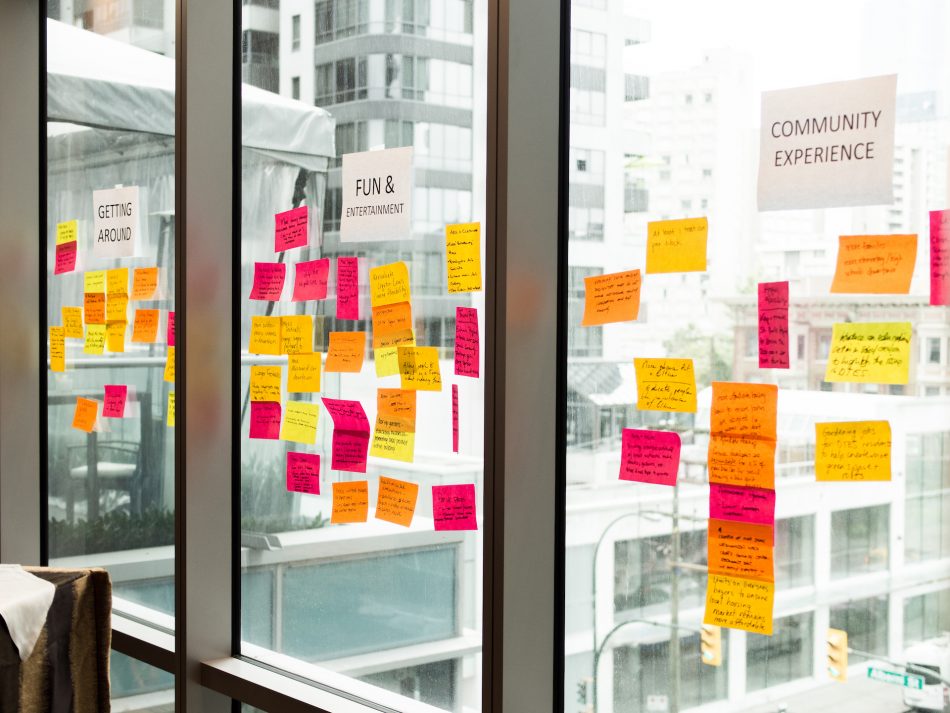 The report found that people wanted Downtown Vancouver to be home to a connected series of “activated alleyways” that are welcoming spaces with lots of “hidden gems” to discover, including galleries, restaurants, and art walls where visual storytelling is welcomed. In a city with a growing sense of isolation, severe land limitations, and scarce public space, this was a huge opportunity to add vibrancy and increase engagement and connection downtown.

Downtown Van’s resulting work in the enhancement, activation and promotion of laneways aims to entice the public to use these revamped spaces by creating an engaging and inviting space that is accessible to all.

During the Reimagine Downtown Vancouver process, we discovered that the downtown area could see a 30% increase in public space if alleys were included. One challenge associated with delivering on that realization was perception. Laneways are typically seen as undesirable spaces and as pragmatic necessities for commercial deliveries and underground parkade access. To overcome that and make use of these underutilized spaces, a revitalization needed to be executed.

Downtown Van collaborated with the City of Vancouver and HCMA Architecture + Design to form the collective “More Awesome Now” with the shared vision of activating and enhancing downtown’s laneways. After completing the More Awesome Now projects, Downtown Van continued to build out the laneway enhancement initiative, adding the objective of delivering one laneway per year into its strategic goals.

The objectives of our laneway projects are as follows:

• Reimagine the laneways as spontaneous destinations instead of areas to avoid, through creative placement and the addition of art, interactive installations, and programming
• Reclaim laneways to be more inviting for pedestrians and people, a maximum of 30% in the downtown area
• Create an inclusive environment that is representative of the people who use it
• Change perspective/feelings towards laneways by presenting an accurate statement of its activities
• Capitalize on underutilized public space by transforming and animating the “in-between” spaces
• Beautify and bring people together inaccessible areas usually reserved for deliveries and commercial services
• Engage with local stakeholders to create an invested community of stewards from concept to implementation

For our first laneway transformation, an additional objective was to prove that it could be done. There was a perception in certain City departments and among the property owners that there were hundreds of vehicles and no pedestrians in the lane. We had a student stand in the laneway to take measurements, and we discovered there were only six cars an hour and 30 pedestrians an hour with no conflicts between the two. Some vehicles were using the space illegally to park near coffee shops or as a shortcut. This information helped changed people’s perception of the possibility of creating a space for cars and vehicles. Simultaneously, it also made an excellent benchmark comparison once the laneway transformation was complete to measure its impact.

Our implementation strategy occurred in the following stages:

• Businesses backing onto the lane
• The distinct properties or buildings
• Which tenants face the lane?
• How do the properties and tenants use the lane?
• What time are various services such as waste, recycling, and organics pick up?
• Number of dumpsters in the lane
• Number of waste haulers operating out of the lane, based on company names on dumpsters
• Time-lapse of the lane to see behaviours and partners around the clock

Revitalizing our laneways has led to an increased public space footprint and increased pedestrian usage of our laneways (foot traffic nearly tripled after the launch of Alley Oop) plus an overall improvement in the quality of time spent in laneways for those who were already frequenting them.

It has also been shown to decrease activities that result in a negative perception of alleys and laneways, like smoking.

Additionally, women are increasingly more likely to use these spaces, with 50% of the users at Alley Oop being women. Public art and bright colours promote the perception that alleys are safe places, and positive activities such as interactions with the installations create a sense of trust in the other users.

Functional use of the spaces have all been maintained as the laneways are still all accessible to vehicles and maintenance.

As well as becoming unique destinations in themselves, the reclamation of the laneways also creates improved walkability and connectivity for bikes and other modes of transportation, rather than serving vehicles alone. The spaces created also provide new locations for informal physical activity and recreation like jogging, basketball, and dance beneath the FIELD installation in Ackery’s Alley.

On top of creating a more engaging space that is otherwise passive, these newly repurposed laneways can now also serve as an event space for pop-ups and community gatherings. Through working with the City of Vancouver, and the other engaged partners who steward the lanes, events like Public Disc, Just for Laughs Comedy Festival, and live music performances have made new use of the space.